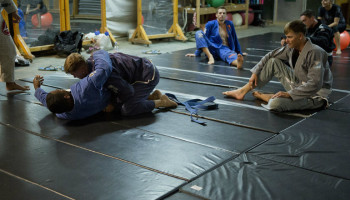 Why Brazilian Jiu Jitsu Is the Ultimate Functional Fitness

By Andrew ReadSeptember 15, 2022Exercise and Workouts Martial arts have been around for nearly as long as we have. From the moment one of our ancestors figured that there were better ways to swing a club or throw a rock, we started systematizing approaches to combat.

When I was growing up, my mother thought I lacked discipline. She probably also thought it would be nice to get me out of the house more often, so she enrolled me in a local Taekwondo class. My parents thought I would do it for a term or two, maybe a year, and then like most kids be done with it. Little did they know that something they suggested over thirty years ago would become a central theme to my entire life. (And by the way, my mother was totally right about me needing more discipline.)

The Many Benefits of Martial Arts

There are many positive aspects to martial arts. The Bushido code of the samurai expected warriors to display loyalty, courage, veracity (honesty), compassion, and honor. Those all seem like pretty positive things for anyone. Tied in with the philosophical benefits of martial arts are the many physical benefits, such as flexibility, speed, strength, power, fitness, and coordination. On top of these are the benefits to self-esteem and self-discipline gained over years of study.

But it’s not all positive. When you fight often, you will get hurt. All of the worst injuries I’ve ever had came from martial arts. I’ve never even come close to hurting myself so badly in any other activity, even when compared to the years I raced motorbikes.

Many martial arts try to lower the risks so that training can continue without these injuries. Some of these schools do so successfully without losing the intent of the art, while others become a watered-down sad spectacle with grown men play fighting each other from meters away with all resemblance to actual fighting removed.

In truth, there’s no right or wrong answer, only a system and training that fits you.

Over the last two decades, one martial art has started to stand out and clearly separate itself from the rest. That art is Brazilian jiu jitsu, often referred to as BJJ, or simply jiu jitsu. BJJ is the art that the UFC was created from. Born by the Gracie family out of the dangerous backroom fights in Rio de Janeiro, BJJ has been likened to a game of chess between opponents.

While I am interested in the fighting aspects of BJJ, I also look at it through a different lens – that of movement and how it can benefit people training for general health. About the same time that BJJ was growing in popularity, we started to learn the importance of ground-based movements for strength and conditioning. These early developmental sequences of rolling and crawling, and the use of other foundational postures including lying, being on all fours, and kneeling, have all come to be synonymous with functional training.

How BJJ Fits Into the Training Hierarchies

There are many ways to create training hierarchies. The following list, for example, is a typical way to figure out where in your regimen you should place different exercise:

It’s this last one that is becoming more and more important in functional training circles. As it happens, the brain is an important part of the training process and the more we engage it, then the better our results are. This is a return to the early days of organized fitness where the purpose of training was the learning of new skills, not the addition of bulging biceps. The Spartans didn’t care how big or ripped they were, only that they learned how to stay alive in combat and save the lives of the man standing next to them.

To increase training complexity we can follow a simple path:

This action of using opposing limbs and crossing the midline is very important as it uses both sides of your brain at the same time. In a gym setting, that is as far as you can reasonably go most of the time. However, advanced trainers will add a little chaos into the mix by utilizing a thing called reactive neuromuscular training, or RNT. RNT can be best thought of as “feeding your mistake.” An example of this might be wrapping a band around the knees of someone squatting and drawing their knees together so they are forced to work harder to prevent their knees coming together.

Now take it to the next level – instead of using a band, have an opponent try to draw you into a mistake and then choke you, and you’ve got BJJ. BJJ is quite possibly the most advanced functional training system on the planet right now. Having had the opportunity to perform movement analysis on many of my country’s top competitors, I was always amazed at how well they moved – until I started seeing the art through the eyes of functional movement. Then it suddenly all made sense.

Now this isn’t to say you should ditch all your current training. Like any combat sport, BJJ will beat you up. Your gym time will not need to be too much, though, as much of what you’re trying to get in the gym will have been fulfilled on the mats. Along with being a great functional strength workout, you’ll also gain flexibility and fitness.

That said, you should also spend time undoing all that damage – your back, neck, and hands will probably cop the most damage, so make sure to do plenty of work to reverse that. Back bends, bridging, deadlifts or swings, hanging, and stretching the forearms and fingers will be essential for you.

If you’re after true functional fitness, I urge you to look at BJJ. While a fantastic combat art, it also has great merit in terms of how it will help you move. Along the way you’ll gain all the individual traits that martial arts bring – such as humility and discipline as well as a bunch of amazing new friends.