How to Season a Cast Iron Skillet Quickly 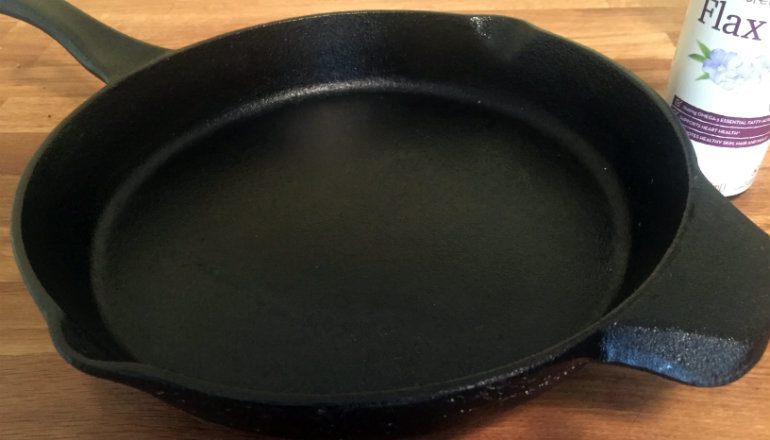 At 35, I have just enough wisdom to understand why cast iron is an excellent choice for cookware. It lasts a lifetime, it’s infinitely reclaimable from rust, and it is masculine in a way that no silicon-coated non-stick egg pan could ever be. Plus, it’s heavy enough to use as a doorstop (or as the counterweight to a fifty-story elevator).

Still, I lack the patience to spend days seasoning cast iron, running through eighteen hours of oiling, rubbing, baking, and cooling. The only interminable odyssey I’m willing to tolerate at this point is watching Grey’s Anatomy with my wife, and so I looked for an alternate route.

Accordingly, I took the best cast iron information I could find (via a set of hyperlinks from Mr. Winslow Jenkins, a hunter/trapper/gluten-free beer brewer/off-grid badass), added a bit of Winslow’s knowledge as a cast-iron only cook, and conducted this recipe.

Step 1: Prepare the Pan for Seasoning

After being grossly mistreated, my twelve-inch cast iron skillet was rusty. I grabbed some gloves, a mask, and a handful of extra fine steel wool from the garage and went to work.

After about half an hour of polishing, I’d removed the rust from the entire pan, leaving a dull, matte gray surface. This surface is your ideal starting point, and a step you should take even in the absence of rust.

Polishing finished, I cleaned the pan thoroughly with soap and water, and dried it with a paper towel.

Step 2: Use the Right Oil

Seasoning cast iron is the process of baking on a layer of oxidized fat, forming a smooth polymer surface. Toward this end, your oil choice should be very specific and your heat should be very high. After checking out this (hyper-nerdy and helpful) blog post from Sheryl Canter, as well as seeing an endorsement of her technique from Cook’s Illustrated, three things were obvious:

Step 3: Dejected, Pick up on Winslow’s Aside

During my research phase (wherein I  bugged Winslow and his wife for information), Winslow mentioned that Sheryl Canter’s technique worked great, but could be done faster.

His recommendation — oil the skillet, and bake at 500 degrees on repeat, just as she says, but instead of running six three-hour cycles, run each cycle for only ten minutes and ignore the cooling phase (and be sure not to burn yourself).

Here’s are the specifics:

While I have no doubt that eighteen hours of careful baking and cooling may result in a superior finish, my skillet was ready to go in under ninety minutes, and the surface was smooth, well-coated, non-sticky, and a vast improvement over what I pulled out of the cabinet. I even used it the next day to cook a ribeye (that may be the best thing ever seared on my stovetop).

For more on cast iron, seasoning, (and going hyper-nerd), here are a few of Winslow’s links: