How Taylor James Found Hope Through the Whole Life Challenge In his late twenties Taylor James, now 31, was living the life of an elite athlete. A professional dancer, he rehearsed almost every day. When he wasn’t rehearsing, he spent hours in the gym. Taylor faced intense pressure to have a perfect body and dieted constantly.

Then, about two years ago, Taylor switched his focus to other creative outlets. He worked more on filmmaking and photography and wasn’t dancing as much. And, like many former athletes and performers, Taylor didn’t know how to incorporate exercise and healthy eating into his daily life on his own. As a result, he struggled with depression and anxiety as he watched his body change. 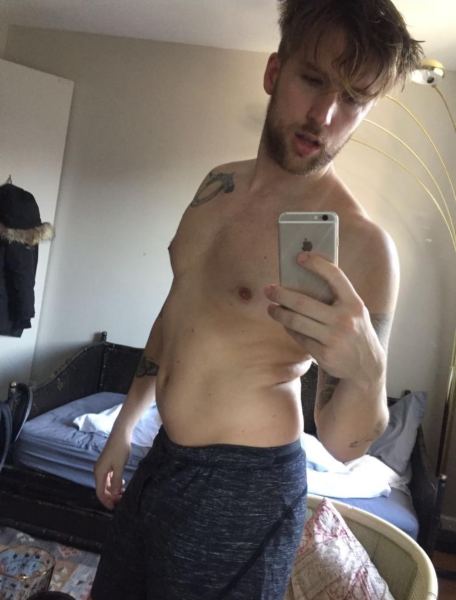 “There was a lot of food shame when I would eat badly,” Taylor said, “and for the last two years [when I was] going through my bout of depression I just ate trash,” he said.

Without dance ruling his life, Taylor didn’t know how to get back on track — he didn’t know where to start. Getting out of shape and not eating well brought up issues of worth and self-esteem, Taylor explained. The longer it went on, the more his negative feelings snowballed.

“You get further and further away from it, and then incorporating healthy eating habits into your life starts to feel more and more daunting. None of it seems possible,” he said.

Finally, in the fall of 2018, Taylor realized he needed some kind of structure if he was ever going to overcome his situation. He was about to start a restrictive thirty-day diet when a friend told him about the Whole Life Challenge.

“It’s sort of like a reset for your whole life,” Taylor said the friend told him. Taylor looked at the website and was immediately on board. He thought the Challenge might offer the structure and perspective he needed.

Taylor registered for the Whole Life Challenge and started to get excited about both the framework and the flexibility it offered.

“I am definitely somebody who operates a lot better when there’s parameters in place,” he said, “and I made a commitment that I was going to be really gentle with myself.”

Taylor hadn’t worked out in two years, so he knew he wasn’t going to be able to go back to the gym and lift as much as he used to. He said the ten-minute-a-day exercise minimum prescribed by the Challenge helped, because part of what had kept Taylor out of the gym was the idea that he had to spend an hour and a half exercising at a time, which is what he did when he was a dancer. “It just didn’t seem reasonable or manageable or maintainable for me to sort of step back into that elite level,” Taylor said. The ten-minute minimum meant all he had to do was participate. And, the deeper message this sent to Taylor was that he didn’t have to be perfect.

“I just really loved that,” he said.

Sometimes Taylor would only work out for twenty minutes, but he made time for movement every day. Soon he realized his workouts were making a difference even if he wasn’t killing himself for an hour in the gym. To his surprise, Taylor found that with less pressure came real results.

“I found myself slowly building up my strength and endurance, so by the time I was finishing the Whole Life Challenge my workouts were ten times harder than when I started because my body was ready to receive that,” he said.

Along with the physical changes, Taylor also paid attention to his mental health. He began treating his anxiety and depression with medication halfway through 2018, which he said helped enormously. During the Challenge, he began to improve his sleep habits, which added even more mental clarity.

Before the Challenge, Taylor said he often watched Netflix or YouTube for hours at night, staying up late and then sleeping in — as an independent photographer and filmmaker, he doesn’t work typical office hours, so he had no work-related reason to wake up at a certain time — but the Challenge changed all that. In addition, once the Challenge started, Taylor cut out alcohol and kept his phone out of his bedroom at night. “I decided to start waking up at 7:00am, which completely changed what my day was like. It made me feel so much more productive,” he said. He made an effort to drink his morning coffee before checking social media, then he’d go to the gym and run errands, leaving the rest of the day to work. When he slept in, he found he’d come up with reasons to skip the gym and not take care of his chores.

“[My new schedule] gave me much more peace of mind knowing I had accomplished most of the things I said I would,” Taylor said.

More than getting back into shape, Taylor said feeling refreshed and well-rested each day was the highlight of the Challenge for him, and what he’s looking forward to the most in his next Challenge.

Sharing the Success of the Whole Life Challenge After completing the Fall 2018 Challenge, Taylor spent the holidays traveling and having fun with friends and family, letting some of his new habits slide. But instead of beating himself up for not eating perfectly or missing workouts, Taylor was gentle with himself. Instead of the self-loathing he used to feel when he missed workouts or ate sugar, he now felt optimism and confidence, knowing that returning to healthy habits was under his control.

“The thing I was lacking for two and a half years was any sort of hope that I could change or that I could feel comfortable in my body again,” Taylor said. That all changed with the Whole Life Challenge.

For his first Challenge Taylor focused on getting back in the gym, eating healthy, and treating his body better, but for his second time around he’s working more on the habit of mindfulness, as well as diversifying his exercise and getting out of the gym to try new things. And Taylor not only committed to his second Challenge, but took it to another level by announcing to his more than 51,000 Instagram followers (@taylorjjames) that he’d be leading a team — dubbed #teamslaytay.

Taylor’s uncle, who has had a knee and hip replacement and limited mobility, also joined his team. Taylor loves helping his uncle and people like him understand they can make changes in their lives, even when they have physical limitations.

“It’s about showing up. It’s about trying your best,” Taylor said. “It’s important for anybody of any fitness level to understand if you’ve been out of shape for a really long time, you can overcome that.”

For years, Taylor James had been afraid to start because the task of reclaiming his health seemed overwhelming. Through the Whole Life Challenge, Taylor discovered the way back to good health isn’t through a juice cleanse or hours in the gym, but through small, everyday habits that add up to a lifetime of good health.