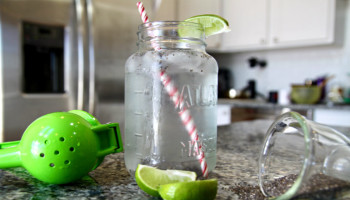 I found out about iskiate in Born to Run, Christopher McDougall’s epic book about the Tarahumara tribe of Mexico (a.k.a. “the running people”).

Iskiate (IS-kee-ah-tay), also known as chia fresca, is a water-based chia drink that supposedly confers huge amounts of energy and endurance on the drinker, bolstered by the superfood status of chia, a squeeze of lime, and a hit of agave.

Of course, I had to build my own (sans the agave), as I’ve been spending much of my recent time trail running and often find myself in need of something interesting to round out my daily hydration requirement.

What I ended up with is a very tasty, supremely hydrating, ridiculously easy-to-make drink that I’ve been consuming twice daily. It has me drinking more water than ever before, and even better — I want to drink it.

You can make your own using the recipe below (and after you try it, feel free to alter lime juice and chia levels to meet your personal tastes). Iskiate (IS-kee-ah-tay), also known as chia fresca, is a water-based chia drink that supposedly confers huge amounts of energy and endurance on the drinker.

You will find that chia seeds have a tendency to settle, so using a container you can shake (rather than a simple glass) may improve your experience.