There’s No Such Thing as Pilates

By Andrew ReadApril 4, 2016Exercise and Workouts 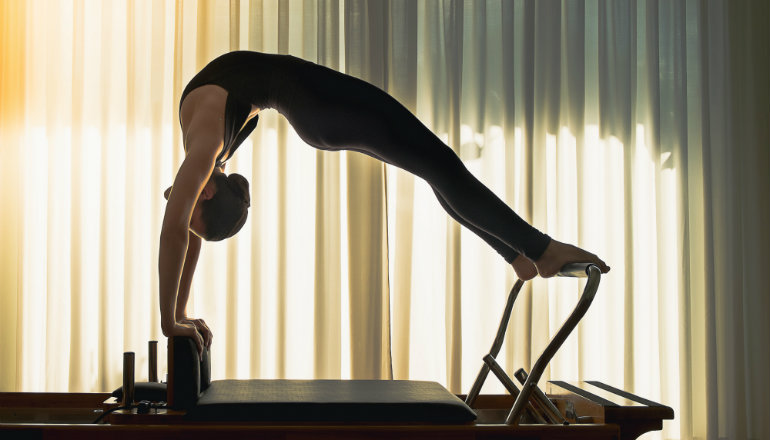 Fitness is cyclic. What was once trendy will soon be forgotten, and tomorrow’s amazing new workout was probably first thought of a hundred years ago. Even in my short time, I have seen the rise and fall of many trends from bodybuilding to indoor cycling to aerobics classes to yoga and Pilates. Often these trends are driven by a few movie stars saying they use these activities to stay in shape. But is that a good indication of whether you should use these methods or not?

Pilates in particular has garnered a reputation for being a modern cure-all, able to fix bad backs and create “long, lean muscles.” Let’s dispel some of those myths, particularly as they relate to back care. 80% of all adults will experience some kind of back pain in their life so sorting out fact from fiction can save you a lot of time and money in wasted treatments.

Stop “Drawing In” and Start “Bracing”

The first, and possibly most dangerous, fitness myth surrounding any form of core training is that of “drawing in.” Back in 1999, a group of Australian researchers found that in patients with back pain there was a delayed firing of a deep core muscle called the transversus abdominus, or TA. Based on that, they advocated doing specific work to fire up the TA. The main way they suggested to do this was by “drawing in” the belly button, as if trying to touch the back of the spine with it. But more recent research by spine expert Dr. Stuart McGill has shown from EMG studies that hollowing, “…can only occur as the abdominal muscles of rectus, and the obliques fall silent. This is not good for athletic performance.” He also states, “…that there is no justification for any special effort directed towards training TA over any other muscle. In fact, our clinical experience suggests that efforts to isolate transverse is problematic – there is more important total muscle abdominal training that really matters for the athlete.”1

A far better suggestion is to “brace.” The reason is simple. Many think of the core as a cylinder, with an open top and bottom. It is far better to realize that the core is a can, with a top and bottom, made up of the diaphragm and pelvic floor respectively. If you were to take a can and crush the sides of it (to “hollow” it, if we’re using the same wording as the original study), doesn’t it make sense that the can then has less structural integrity? Doesn’t it make more sense instead to use a stronger material on the surfaces so it can withstand pressure better?

That’s what bracing does for the trunk. By stiffening all the surrounding muscles, you are effectively turning your can from thin aluminum to titanium.

Pilates Does Not Cure Back Pain

The next big myth surrounding Pilates is that it is the best thing you can do for your back if you’ve had any issues. Well, the first step in sorting fact from fiction is to look for the money. When you find a bunch of papers written saying Pilates is no more effective than a general exercise program in reducing back pain, and in many cases less effective, yet there is one paper saying the opposite, you should ask, “Why?” Why does that one paper advocate Pilates?

The reason is simple – the head of that paper teaches Pilates. Do you think it might have been in their best interest to advocate it as a treatment method? This study from the Cochrane Database of Systematic Reviews and also from 2015 found that, “We did not find any high quality evidence for any of the treatment comparisons, outcomes or follow-up periods investigated. However, there is low to moderate quality evidence that Pilates is more effective than minimal intervention for pain and disability. When Pilates was compared with other exercises we found a small effect for function at intermediate-term follow-up. Thus, while there is some evidence for the effectiveness of Pilates for low back pain, there is no conclusive evidence that it is superior to other forms of exercises. The decision to use Pilates for low back pain may be based on the patient’s or care provider’s preferences, and costs.”3

Or this 2013 study from the Brazilian Journal of Physical Therapy, which found, “Pilates was better than a minimal intervention for reducing pain and disability in patients with chronic low back pain. Pilates was not better than other types of exercise for short-term pain reduction.”4

And it took me a whopping ten minutes to find another dozen studies that said the exact same thing.

There’s No Such Thing as Pilates

The biggest problem in using Pilates as a treatment tool comes down to one thing – there’s no such thing as Pilates. While all the Pilates you find anywhere in the world has been developed off the work done by Joseph Pilates in 1934, it’s done differently everywhere.

What will make a difference is some smart rehab work to get everything working properly again. McGill has said the number one cause of back injury is nothing more than a lack of strength. Andrew Lock, one of the world’s leaders in spine management, advocates a resumption of strength training that progressively overloads the muscles safely to ensure a full, safe return to functional movements under stress.

The MRIs below are from two of Andrew Lock’s clients. The one of the left taken when a woman first came to him after four years of Pilates “rehab.” The one on the right is from a client who did strength training for rehab with Andrew. Looking at the MRI pictures, and seeing how the “can” has been made thicker and stronger in the image on the right, it’s easy to figure out which back is more resilient and capable of dealing with whatever life throws at it.

How to Actually Heal Your Back Injury

McGill explains there is a simple strategy to follow to regain back health that doesn’t require paying $35-45 per session and specialized equipment that looks like it could be in a torture chamber or S&M set.

Like with anything in the fitness and health fields, everything should be backed up by research. And when it comes to Pilates, the results according to research simply don’t match up with what the people who sell the treatment are saying. Of course, that could be because they often sell the training and equipment for Pilates, too. Hmm.

A far better idea is to wait until pain subsides and begin a program of gradual strengthening using traditional exercises — ones proven more effective than Pilates.