Every fall and winter, Judy Baker Campbell’s life gets busy. Judy, 42, lives outside of Toronto, Canada, with her husband and three teenage children. She also owns a vacation rental company in Mexico with 120 properties. When winter hits and everyone wants to escape the cold, Judy’s business heats up and she has to work overtime to keep up with demand.

But in the fall of 2017, the stress became overwhelming. Judy took it out on her family, snapping at her kids and walking around in a constant state of irritation. “[The stress] affected my marriage,” Judy said. She stopped exercising and wasn’t eating well or getting enough sleep — there just didn’t seem to be enough time.

Then, in early 2018, Judy’s 47-year-old husband, Dave, went in for a blood test. The numbers weren’t good. The doctor recommended he start taking a cholesterol-lowering drug. Dave had also been struggling with slow weight gain over the years, and he wanted to make a lifestyle change.

A friend of Judy and Dave’s recommended the Whole Life Challenge, so the couple signed up in the spring of 2018. Judy wasn’t overweight and she followed a healthy diet, but she wanted to support her husband. She thought maybe she could get rid of the few extra pounds she’d put on in recent years.

What Judy didn’t know was that the Whole Life Challenge would change her life.

Both competitive people, Judy and Dave immediately started trying to rack up the most points each day. Judy didn’t have trouble getting top scores for nutrition and hydration, but she routinely fell short on her sleep goals.

“Every night my sleep goal was 7.5 hours and I got like 6 hours, 5 hours of broken sleep,” Judy said. Constantly thinking about her business, Judy struggled to quiet her mind at night. “Through the score-keeping [in the Whole Life Challenge], I realized I was keeping a perfect diet, but getting zeros on sleep every day. I didn’t like the fact that I was dropping down that scoreboard,” Judy said.

Even though she was avoiding sugar, bread, cheese, and processed carbohydrates, Judy only lost about two pounds during the first half of the Challenge. She realized she wasn’t going to see any changes in her health if she didn’t improve her sleep, so she started forcing herself to stay in bed.

“I run my own company, so I can play around with my hours. If I was waking up in the night I could just move my alarm out in the morning,” Judy said.

“I have to get this sleep in,” Judy said she thought at the time, “I have to find a way.” 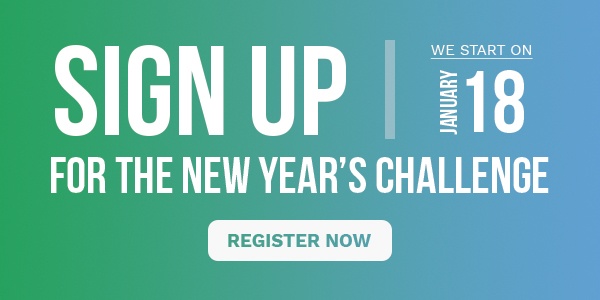 Judy and Dave felt their lives beginning to change with that first Challenge, and when it ended they were hungry for more. So hungry, in fact, that Judy kept working on her healthy habits outside of the Challenge.

In the six weeks between Challenges, Judy began reading about meditation and positive thinking. She realized she was getting stuck in looping negative self-talk, worrying about possible negative outcomes. All this was keeping her up at night and causing unnecessary stress.

When the summer 2018 Whole Life Challenge began, Judy decided to focus on her mental well-being, instead of diet and weight loss. She wrote at least three things she was grateful for in her daily Challenge reflection. She loosened her grip on nutrition, averaging three or four points out of five. Judy started meditating and exercising every day. Instead of going for a brisk ten-minute walk, like she did in the first Challenge, Judy pushed herself to exercise at a high intensity — enough to break a sweat — for at least ten minutes every day.

“The effect was huge,” Judy said. “My sleep went from being broken and intermittent to no problem, eight hours a day. My husband was like, ‘Wow, it’s nice to have you back,’” she said.

And while Judy was focused on sleep, exercise, meditation, and gratitude, something else happened — she lost weight. In the first Challenge, when Judy was much more strict about her food choices, she lost about three or four pounds. In the second Challenge, when she was more lenient, Judy lost six pounds.

“Maybe the exercise had an impact, it’s hard to say, but I felt like it was connected to my stress levels dropping,” Judy said. It was one thing for Judy to exercise and get enough sleep in the summer, her slow season. Judy knew the real test would be the fall and winter, the busy season. She wasn’t sure if she’d be able to keep meditating, exercising, and eating well once the long days started up again.

“I started to feel [the stress] building, and I really focused on the exercise, upping the amount of time dedicated to it,” Judy said. “I restructured my days so I started work after my exercise and meditation every day in the morning. I didn’t come in [to work] until it was done.”

The result, Judy said, is a profound difference in the way she responds to the stress. “Last year I was feeling like I was failing at being a parent, because I was grumpy all the time, short-tempered and impatient. And I wasn’t being a great partner or wife, I wasn’t emotionally available for that, because of the stress levels. As a business leader, how could I boost morale when I was feeling so bad about things? To be able to turn those things around, that’s success,” Judy said.

Meanwhile, Dave lost almost twenty pounds after three Challenges. The results from a blood test midway through the third Challenge showed his inflammatory markers dropped by over thirty percent, with some indicators showing a forty-percent drop since starting the Whole Life Challenge.

“I feel so grateful to have been introduced to it and so appreciative that the Challenge exists. It’s had a really amazing effect on our family,” Judy said.

Judy said she and Dave plan to keep doing the Whole Life Challenge. She feels the Challenges keep her accountable, and she looks at them like a gym membership — she’ll keep signing up.

“I feel profoundly different in the way that I am responding to the indicators of stress,” Judy said, which she attributes entirely to the healthy habits she established through the Challenge.

“The cost is nothing,” Judy said, “less than buying a coffee a day. To have that there and keep ourselves checking in, I can’t see anytime in the near future stopping doing it.”