How Going Sugar-Free Actually Made My Life Sweeter 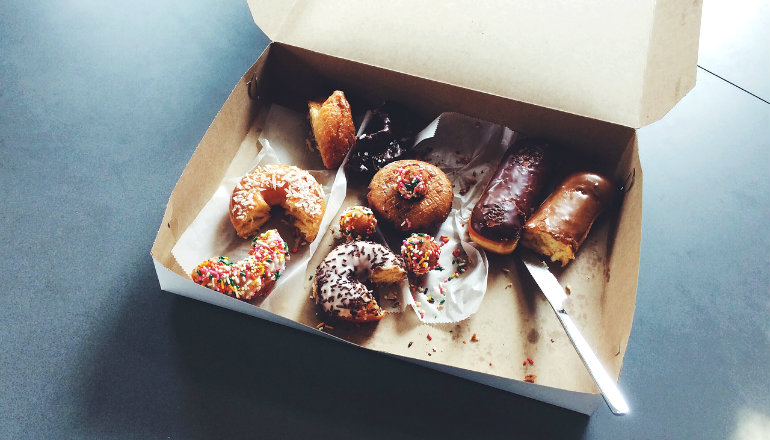 Years ago, when I first became a mother, I was at the playground trying to shield my son from germy interactions with runny-nosed toddlers, when one mom posed what I considered a ludicrous question.

“Do you think it’s just a coincidence that ‘cold season’ comes right on the heels of our kids eating their weight in Halloween candy?”

Was she insinuating that eating candy made people sick?! I had pegged her as a nut already, but as I popped a few more of my son’s M&M’s into my mouth, I found myself feeling inexplicably hostile that she would even say such a thing. “How dare you malign candy consumption,” I thought. It felt like an act of treason.

We love our candy. And cake. And cookies. And ice cream. And I mean, we love it with a vengeance. It took me over a decade to finally see that this love may come at a great cost.

But I also saw how simple the problem is to reverse.

From Lifelong Eeyore to Apprentice Tigger

The first time I participated in the Whole Life Challenge, it was prompted by a last ditch New Year’s Resolution wherein I had hoped to finally lose the extra weight I’d been carrying around since I’d turned fifty.

I approached that first Challenge with a lot of skepticism and a clear exit strategy. As a person who rarely gives up anything, I said to myself, “I’m just going to try it and if I hate it, I’ll quit.” Such was my eye-of-the-tiger resolve. At the time, I was under the impression that I was a very, very healthy eater.

Of course, I had a few granola bars every afternoon, but they were from the health food aisle, so they must be healthy. I ate zero-fat yogurt and low-fat sorbet and I hadn’t had even a sliver of butter in years. So, it was somewhat of a shock to me how many of my “staples” I was being asked to give up on the Lifestyle level of the Challenge.

And even more of a shock how cranky and resentful I became during the process of going sugar-free.

Note: Because I have no willpower at all, I found support in a technique called tapping (aka EFT) that I found on Dr. Mercola’s website. Two tapping sessions (alone, in the privacy of my own home) mercifully eradicated my desire for sugar, so much so that I can keep chocolates in the house and have absolutely no desire to eat them.

Drop Your Snickers and Step Away From the Sugar

For many people, sugar acts more like a drug than a food. We all know it affects our mood — that’s a big part of the appeal. If you Google “sugar addiction,” you can find plenty of articles about how sugar acts on your brain, how sugar withdrawal is similar to that of highly addictive drugs, and how we’ve been duped as a culture to believe that fat is the root cause of all our weight (and health) issues.

But even if I’d never read a word, I’ve seen for myself how sugar acts on our nervous system. A few days after this past Halloween, I ran a focus group comprised of eight sixth grade girls. I had a list of questions to discuss with them about a new product being developed. The developers had put out a big bowl of leftover candy for them to snack on during the two-hour session. Within thirty minutes, these girls couldn’t sit still. They were sliding out of their chairs, piling on top of each other. I felt like I was sitting among a litter of new puppies. But sugar also affects the way our body functions. Because, in many of us, sugar causes inflammation. Inflammation is our body’s reflexive response to protecting itself while it makes repairs. Think: swelling around a sprained ankle. That’s an extreme example of what happens when your organs are stressed and unable to work efficiently because they are busy trying to extract nutrients from non-nutritious food. Or required to work twice as hard in order to process all the chemicals and additives (which, I’m sorry to say, includes sugar), in so much of the food that we’re so used to eating.

When we’re young and our bodies are still new-ish machines, we can handle that extra work a lot more easily than when our machinery has been around the block a few times. Imagine dumping sugar into the gas tank of your car. It’s actually a myth that the engine will seize, but the engine will still need to be cleansed of the sugar. And, as you can imagine, that repair is not going to happen while you’re zooming down the highway. Everything needs to stop while the gas tank is emptied and cleaned.

That’s what the Whole Life Challenge does for you.

The Whole Life Challenge eating guidelines are designed to remove most of the foods that cause inflammation in most people. And that removal includes the horror of stepping away from our beloved sugar. I have led WLC teams for seven challenges now, and the single thing my teammates routinely share is how much better they feel once they give up sugar.

Going sugar-free is not easy to do in this society, where it’s simpler to grab a granola bar on the go than it is to pack an apple and almonds. And because processed sugar is everywhere, it is a tough commitment to make on your own. But the support of a team goes a long way to get you through that initial detox. And once you start feeling the benefits yourself, that’s often all the motivation you need. Jessica Wolf is a freelance writer and editor living in Montclair, New Jersey. Her first Whole Life Challenge began in January 2014, during which she gave up sugar and gluten (kicking and screaming) and has not (knowingly) had either of them since. At 53 years old, she began that Challenge hoping to lose five pounds. Four months later, she was down almost twenty pounds and felt better than she had in her forties. Since then, she has completed seven Challenges, five as a team leader. You can learn more about Jessica on her website.