Everything You Need to Know About Baby Goat Yoga

By Miriam CihodariuJuly 16, 2018Mobility and Yoga Lately, a new trend has taken the yoga world by storm: baby goat yoga. Also known as caprine vinyasa, baby goat yoga has gotten hundreds of people practicing their asanas in the company of adorable…baby goats.

Ever since I first saw the baby goat yoga class report pop up in yogi circles, I was double intrigued:

While goats are among the best-known domestic animals across the world, most yogis in the Western world aren’t accustomed to interacting with them so closely. But baby goat yoga sure looks like a lot of fun with these melt-your-insides cute companions:

Not quite sure what to make of this trend? Here is everything you need to know: how it started, where it’s practiced, what to expect from a baby goat yoga session, and more. After all, who wouldn’t be curious about yoga with baby goats?

What Is Caprine Vinyasa or Baby Goat Yoga?

A caprine vinyasa session is meant to be a relaxed form of yoga, consisting of various asanas (poses) primarily at beginner level and intended to be open to yogis of every skill level.

During a typical baby goat yoga session, the participants are more than welcome to pet the goats or focus on the yoga practice — but the goat kids are likely to make the class more challenging than normal by climbing on you while you’re trying to keep a pose. With tremendous energy and playfulness, but also a short attention span, the baby goats will attempt to break your concentration and get you to play with them instead.

The goat kids are also known to pick a random mat for a quick nap — or even a random yogi to nap on if they manage to climb on your back or in your arms. 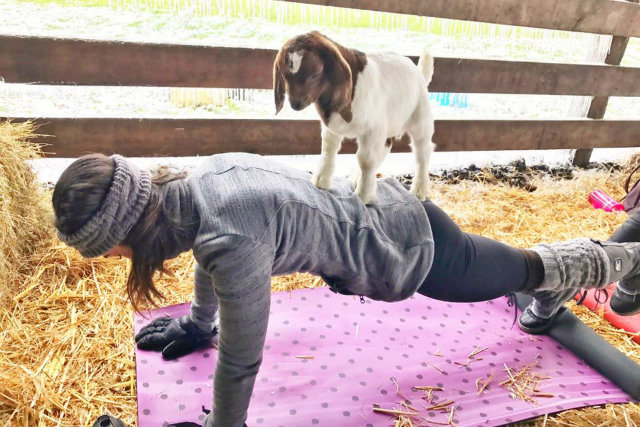 Some facilities also allow the participants to feed the yoga kids some light snacks (which the farm prepares in advance, so please don’t bring any food with you). This activity depends on the organizer and on the age of the baby goats, though, so you shouldn’t count on it happening with every experience.

In spite of all this overwhelming cuteness, you are supposed to carry on with your class while doing your best to also accommodate the little fur balls. Doing yoga with baby goats is an exercise in concentration, but it can also be a humbling lesson about different forces of nature and life energies coming together under the same roof.

Said another way: it’s pretty hard to take yourself or life too seriously when there are baby goats involved, so it’s a great way to break from your normal mindset and relieve stress.

A note regarding the well-being of the goats: all centers and farms that organize caprine vinyasa classes are deeply focused on caring for the baby goats and their mothers. There is nothing inhumane about the practice, and you can rest assured the little furry friends are having a blast growing up in a safe and nourishing environment.

Officially, goat yoga was started in 2016 by Lainey Morse, an Oregon farm owner who was already organizing a “goat happy hour,” an event where people spent time with her goats. When Lainey’s yoga instructor asked if she would like to throw some yoga into the happy-hour mix, a wonderful idea was born — and the caprine vinyasa yoga classes turned out to be a hit.

According to Lainey, goats are the ideal therapy animals. Unlike other animals that relieve stress in humans, goats don’t need to develop a special bond with a person before they start fully interacting with them. Both baby and adult goats will come right up to you asking to be pet, even if you’re a stranger who just walked into their barn.

Currently, Lainey is in the process of trademarking goat yoga as her own creation. She quit her marketing job and is now focused exclusively on developing her yoga and goat happy hour events. The trend is growing far beyond Oregon now, though, and yoga with baby goats is available in many locations.

Where Can You Practice Baby Goat Yoga?

Baby goat yoga has been springing up (no pun intended this time) all over the United States. If no baby goat yoga sessions are available in your town, you can plan a trip to a farm that hosts caprine vinyasa classes. Here are some of the places where you can book a kid goat yoga class:

The original place where goat yoga started, Lainey Morse’s Oregon farm, is open for visitors. Classes are led by Heather Davies, the yoga instructor who gave Morse the idea for goat yoga classes, and visitors can attend one of the many goat yoga events organized on the premises. In the near future, Morse and Davies are looking to expand the practice and open goat yoga studios in Washington, Georgia, Ohio, and Kansas. This lovely yoga farm has organized caprine Vinyasa classes every spring since 2017. There’s a limited time on each set of events, because goat kids are only available on the farm during the spring months, according to the goats’ natural reproduction cycle. All the profits from this farm’s baby yoga classes are donated to various charities. In 2017, over $5,500 was donated. Another great farm where you can practice goat yoga is Lavenderwood in Thousand Oaks, California. Sometimes they take their practice on the road, making an appearance and organizing a goat yoga class at events across the state. Entrance fees are very affordable, but the spaces for every class are limited, so you should hurry to secure your seat if you’re in California. Finally, an upstate goat yoga studio is offering classes at a pop-up studio in Brooklyn. If you’re in New York, don’t miss out on the chance to practice yoga with cute baby goats surrounding you! 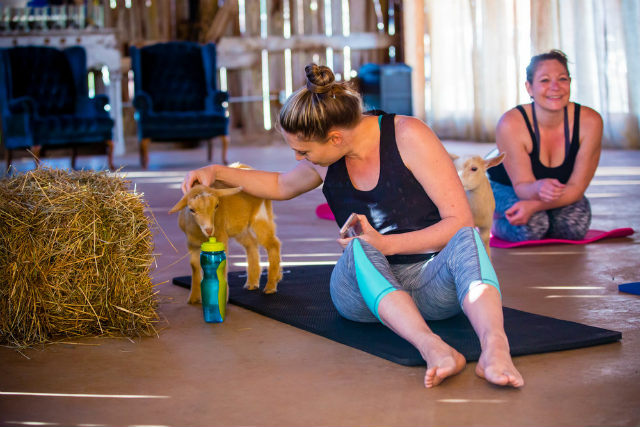 How to Prepare for a Baby Goat Yoga Class

Needless to say, baby goat yoga is a different, um, animal (sorry, but we just had to) than a regular yoga class. For the most successful experience, keep the following tips in mind:

Are You Ready for the Baby Goats?

There are other farms and studios offering goat yoga classes besides the ones presented above. If you live in the U.S., try to search online for goat yoga classes in your state and see if you’re lucky enough to have an event near you. With the rising caprine vinyasa yoga popularity, something is bound to come up.

It remains to be seen whether all these studios will still be offering goat yoga classes once Morse completes her goat yoga trademarking process. But, with the studios she plans to open in states beyond Oregon, one way or another goat yoga is going to be available in across the U.S. and hopefully, one day, in other locations across the world.

Miriam is in charge of the BookYogaRetreats blog and has a background in anthropology, which makes her completely fascinated with cultural expressions. When she's not doing marketing stuff, she drinks tea or pets the neighborhood cats. She relishes the rare spare moment to write about something she loves, and tries to make the most of it.