How to Get Your Partner to Play the WLC (Without Nagging)

By Hilary AchauerSeptember 20, 2021How to Play Essentials When your partner or spouse doesn’t want to do something, no amount of cajoling or nagging can convince them.

Our house is filled with giant collections of comics. I’ve tried over the years, but each time I pick up a comic book, I get distracted by the art and can’t figure out how to read the panels. My husband — a massive comic book fan — tried to get me to read comics over the length of our almost twenty-year marriage, but he’s finally accepted my disinterest, comforted that at least our children share his love of superheroes.

Despite this disconnect, we do agree on most of the big issues, including the importance of prioritizing our health and well-being. We support each other in exercising regularly, eating mostly unprocessed food, and trying to get eight hours of sleep every night.

Not all couples see eye-to-eye on health and wellness. It can be stressful if one partner is always pushing the other to stay up late, drink wine, and eat dessert, when the other wants to go to bed early and spend the morning at the gym.

If you have a health disconnect with your partner, there is hope! Read on for the science behind couples and healthy habits (it’s encouraging!) and some tips from current Whole Life Challenge players to get your spouse on board. Your Partner and Your Health

A study of more than 12,000 people from over 7,000 households revealed that when one spouse improves his or her health-related behavior, the other spouse is likely to follow suit.

This holds even when one partner changes independently. For example, if one spouse quits smoking. When one spouse changes her behavior, soon there are fewer ashtrays in the house and a new rule of no smoking inside. The husband finds himself outside, smoking alone, with a strong incentive to join his partner in quitting. Once one spouse has success in a healthy behavior, the example and behavior being modeled influences the other to change his habit.

A study from Johns Hopkins University focused on exercise and found that if a female spouse met the standard recommendation for exercise, but her husband didn’t, he was 70% more likely to rise to those recommendations within six years as compared to men whose spouses did not exercise. Women were about 40% more likely to match their husband’s exercise regimen after a few years.

On the less positive flip side, if one spouse stopped exercising, the other spouse was more likely to give it up as well.

4 Tips to Get Your Partner to Practice Healthy Habits

We don’t pick up all of our spouse’s behavior (witness my failure to enjoy comic books), and there are, of course, exceptions to this statistic. What’s more, the process of influencing your spouse takes time — notice the research said it took years for spouses to align.

So, if you want your partner to start eating better or exercising right away, what can you do? I spoke with some experienced Whole Life Challenge players and here are some of the strategies that worked for them:

Lewelen said she participated in eight Challenges before her husband was interested, and even then he didn’t want to play officially.

“Just keep doing what you’re doing,” is her advice. “[Your spouse] will most likely see the benefits you are getting and join you. If not you can still influence the menu,” she said.

Trish said she was the primary meal planner at her house when she started doing the Challenge.

“Everyone in the house ate what I was eating for dinner,” Trish said. “We still had stuff in the house that wasn’t compliant, but if me or my husband was cooking, it was a compliant meal, and everyone ate it.”

Her kids are now all out of the house, and even though Trish does the Challenge and her husband doesn’t, he still eats the Challenge-compliant meals she prepares. 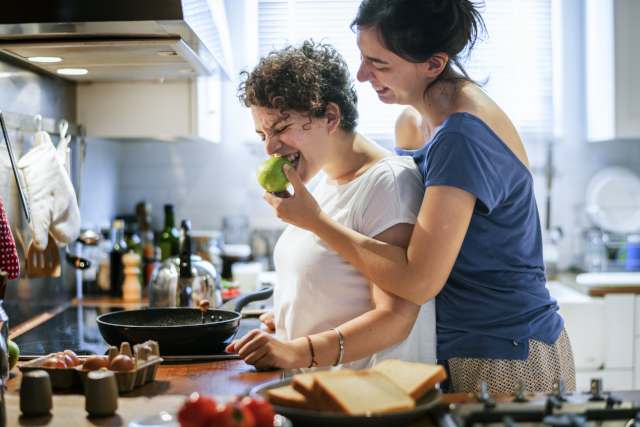 Gloria had been trying to lose weight and make healthy changes in her life for years, and found it difficult to stay on track when her partner was telling her to splurge. Then her gym posted about the Whole Life Challenge and she decided to give it a try.

“After some thought about how many things he’d have to change, [my partner] decided he wanted to be teammates and go through it all together,” Gloria said. It took some convincing, because Gloria said he had the most to change — not with weight loss but with the quality of his food and adopting healthy evening habits.

But the results have made the effort worthwhile — for both of them.

“It’s been an awesome change for both of us, we’ve kept each other on track, and been healthier in general,” Gloria said. They are now on their third Challenge together, even while in the process of moving to a new state and starting new jobs.

“We’re doing what we can and being mindful of what we need to be doing. New state, new jobs, new routines to be developed, but it’s all just making our bond stronger, which is good since we’re getting married in November!” Gloria said. Missy is playing her second Challenge with her husband. They’ve successfully done various fitness- and diet-related things separately in the past, and she said the key to their mutual success is a focus on support, not pressure.

“I personally wouldn’t want him bugging me about joining him in something if I wasn’t intrinsically motivated to do it already, since him bugging me won’t change my internal motivation at all,” Missy said.

“So, we leave each other alone but support each other in our efforts, whether combined or separate,” she said.

Get Your Partner on Board by Setting a Healthy Example

If you have a spouse who doesn’t seem motivated to change his or her habits, the best thing to do is continue to lead by example:

Be patient — it may take time, but the research shows the odds are in your favor!